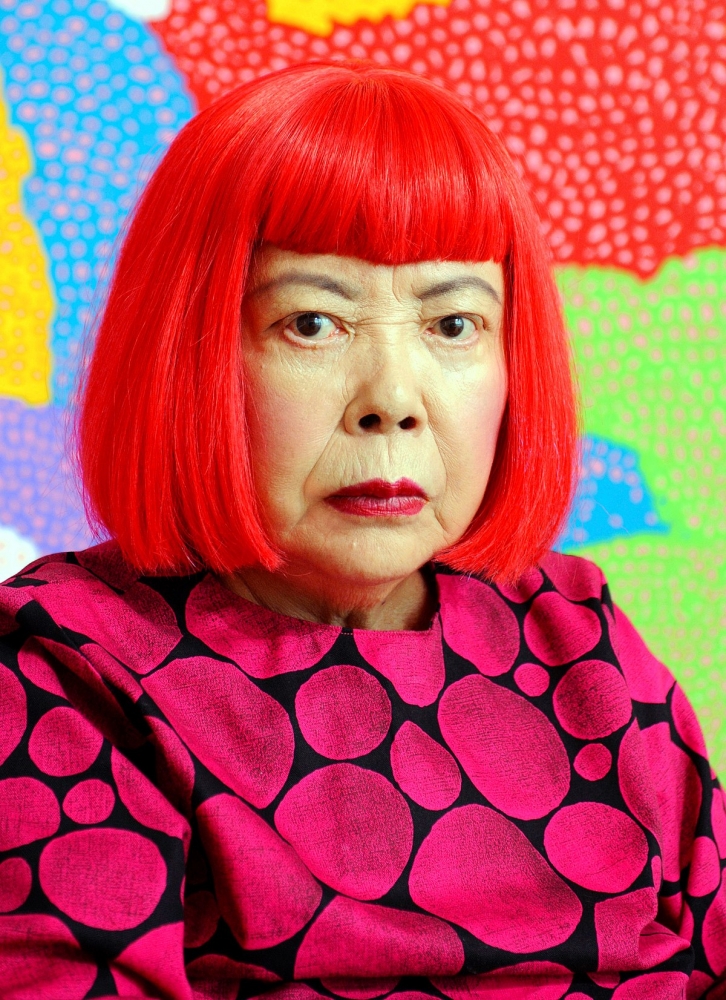 Well known for her use of dense patterns of polka dots and nets, as well as her intense, large-scale environments, Yayoi Kusama works in a variety of media, including painting, drawing, sculpture, film, performance, and immersive installation. Born in Japan in 1929, Kusama came to the United States in 1957 and quickly found herself at the epicenter of the New York avant-garde. Kusama proved herself a unique artist amidst the circles of Andy Warhol and Claes Oldenburg, producing paintings based upon hallucinations she experienced as a child and installations such as Infinity Mirror Room (1965). After achieving fame through groundbreaking exhibitions and art “happenings,” she returned to her native country in 1973 and is now one of Japan’s most prominent contemporary artists.

Despite this initial success, mental health issues led her to return to Japan in the 1970s. Living in relative obscurity over the following decades, it was not until she represented her country in the 1993 Venice Biennale that Kusama returned to the public eye. 2017 was an eventful year for the artist; it included the inauguration of her museum "The Yayoi Kusama Museum" in Tokyo, the debut of “Yayoi Kusama: Infinity Mirrors” at the Hirshhorn Museum and Sculpture Garden in Washington, D.C., “Yayoi Kusama: Life is the Heart of Rainbow” at the National Gallery Singapore, and the concurrent exhibitions “Yayoi Kusama: Festival of Life” and “Yayoi Kusama Infinity Nets” at David Zwirner in New York. The Broad museum in Los Angeles sold 90,000 $25 tickets in an afternoon to its Kusama exhibition. In 2018, the documentary "Kusama: Infinity" directed by Heather Lenz was released, chronicling the artist's extraordinary life. Since 1977, Kusama has voluntarily chosen to live at the Seiwa Mental Hospital in Tokyo, Japan. Today, the artist’s works can be found in the collections of The Museum of Modern Art in New York, the Los Angeles County Museum of Art, the Mattress Factory in Pittsburgh, and the National Museum of Modern Art in Tokyo, among others.