Chase Contemporary is pleased to announce Between Colors and a Hard Place, an exhibition of new paintings by Chinese artist Liu Shuishi. This presentation, featuring gestural and richly textured oil paintings, examines the artist’s own philosophies about identity and the tension between existence and selfhood. On view at the gallery’s 23rd street location, the show marks the artist’s second solo exhibition at Chase Contemporary.

Every encounter with Liu Shuishi’s paintings is one with a philosophical mind at work. Ideas are made concrete, conveyed by highly expressive yet controlled marks of paint on canvas. Flowing from a combination of figurative illusions and textual references given by the allusive titles, each title unveils a philosophical concept. For instance, Can’t Identify alludes to a kind of self-portrait where the subject is squeezed between two masses of color. The figure is thin and elongated like a Giacometti figure, which the artist first saw in Paris. Like Giacometti, Shuishi is squeezed between two cultures – his native one and his adopted one- the Eastern and the Western, feeling the pressure and also the sense of liberation he shares with every émigré artist who has preceded him.

Liu is quiet, meditative, and a voracious consumer of philosophy. Following the prompting of emotion, he brings his innermost thoughts and feelings outwards in painting. Liu follows in the tradition of revealing the journey of man alone, thrown into existence, bound by passionate human emotion. In the painting Kafka, the cover of a book is part of the painting, superimposed together with a brush as an object trouvé. The book is a short story by Franz Kafka, The Great Wall of China. In that short story Kafka describes the building of the Great Wall in many sections far away from one another, instead of as a continuous wall. It is impossible to produce a unified work; we always hopelessly work in fragments, piece after piece, dreaming of the wholeness that lies ahead.

The triangle and the circle are recurring symbols in Liu Shuishi’s paintings. The former indicates a sense of stabilization, the latter a sense of the unknown. Shuishi’s ideas of the sphere stand in contrast to the Greek philosopher Parmenides. For Parmenides, the circle or the sphere was the perfect image of a complete, stable world – the image of Being. In Liu’s version, we never see the beginning or end of a circle nor of a sphere, and with a sphere, there is always a side that we cannot see. The circle is always rolling, never at rest. It is perhaps the best image for poetic thinking, where thought is always in motion.

Liu Shuishi is a contemporary painter and installation artist based in New York. He was born in Xi’an, China, in 1962, an era inflamed by class conflict. Liu entered the Xi’an Academy of Fine Arts in 1987. However, Liu felt at odds with the Academy’s classical training and left after two years to teach art classes. It was not until 2007 when he began reading about the self and consciousness through popular philosophers like Nietzsche, Immanuel Kant and Sigmund Freud, that Liu developed a taste for modern and contemporary art. Philosophy became the primary driving force behind Liu's artistic practice. In 2009, Liu exhibited in Paris at the Salon du Carrousel du Louvre Paris and at Art en Capital, where he was awarded a silver prize by Société Nationale des Beaux-Arts. In 2015, Liu participated in the 56th International Art Exhibition of the Venice Biennale. He has enjoyed solo exhibitions at the Zhuhai Museum, Zhuhai, China; Today Art Museum, Beijing, China; and the Macao Foundation, Macao, China. He has participated in group exhibitions at the GuangZhou Museum of Art, one of the largest art museums in South China, and at the National Art Museum of China in Beijing, one of China's largest art museums. His works are in the collections of the Macao Foundation, the Chinese Peoples' Institute of Foreign Affairs, and former US State Secretary Henry Kissinger. The artist lives and works in New York. 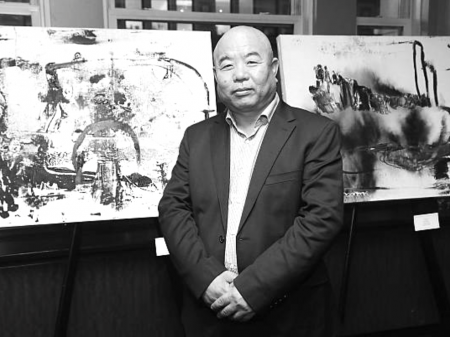