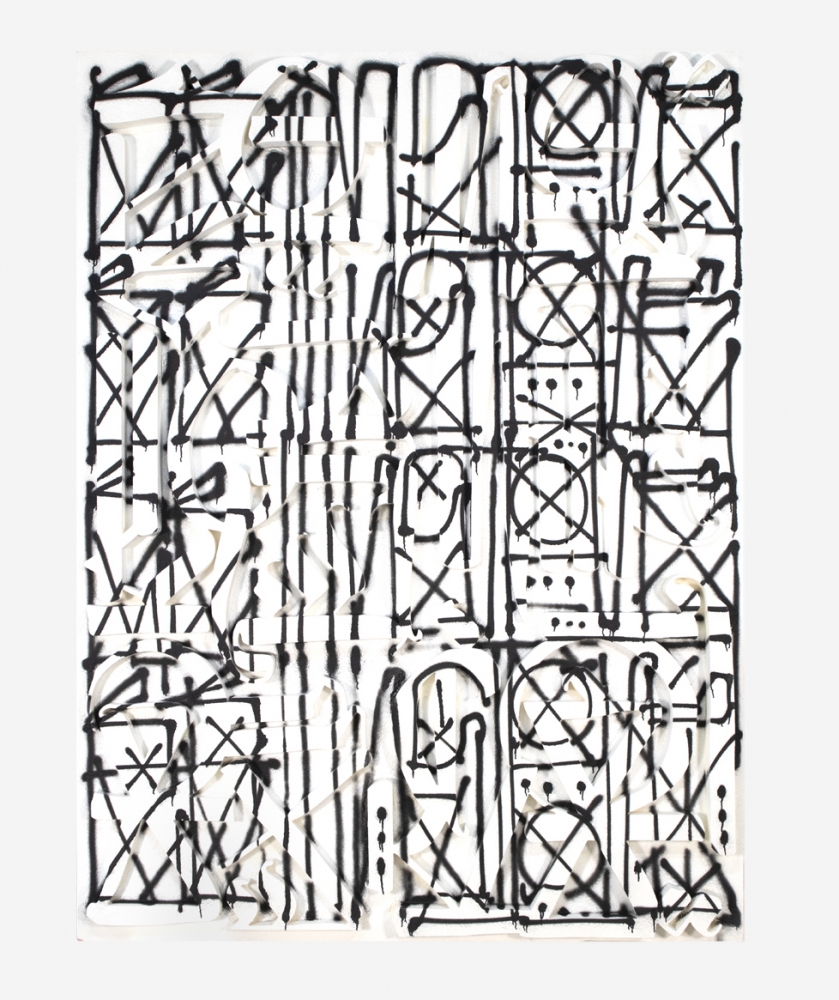 We are currently exhibiting a selection of important Retna paintings at our New York location. Several monumental paintings will be on view, which have not been exhibited since Retna's "Hallelujah World Tour" exhibition in 2011. These extraordinary works mark one of the most important periods in Retna's career. The same year that Retna was creating some of his most imposing paintings for the "Hallelujah World Tour," he was participating in the Art in the Streets exhibition at MOCA (the first major U.S. museum survey of graffiti and street art which traced its development from the 1970s to the global movement it has become today), Street Cred at the Pasadena Museum of California Art, and painting the tail of a business jet in Geneva for VistaJet.

Raised in Los Angeles, RETNA (born Marquis Lewis 1979) grew up surrounded by murals and graffiti culture. The artist saw street art as an alternative to gang culture and consequently fully immersed himself in the genre from an early age. RETNA is internationally recognized for having created his own linguistic script, taking inspiration from a myriad of global typography, from Hebrew script to Egyptian hieroglyphics. Each of his canvases carries its own specific meaning, conveying a particular event or set of dialogue.

His works are in the private collections of Jeffrey Deitch, Swizz Beats, Usher, and Dave Chappelle, among many others. RETNA’s large-scale mural across the eastern exterior of Restoration Hardware’s new gallery in West Palm, Florida. He has collaborated with major fashion brands including Nike, Louis Vuitton, Chanel and Helmut Lang and designed the artwork for Justin Bieber’s ‘Purpose’ album cover. RETNA also acted as the artistic designer for the San Francisco and Washington National Opera’s production of AIDA. In 2013, he was invited to create art installation inside Museum of Contemporary Art, Los Angeles, CA. He has exhibited at venues throughout the world, notably including L.A. Art Machine in Los Angeles, Don Gallery in Milan, Yves Laroche Galerie d’Art in Montreal, and Art for All in Malaga. The artist continues to live and works in Los Angeles, CA. 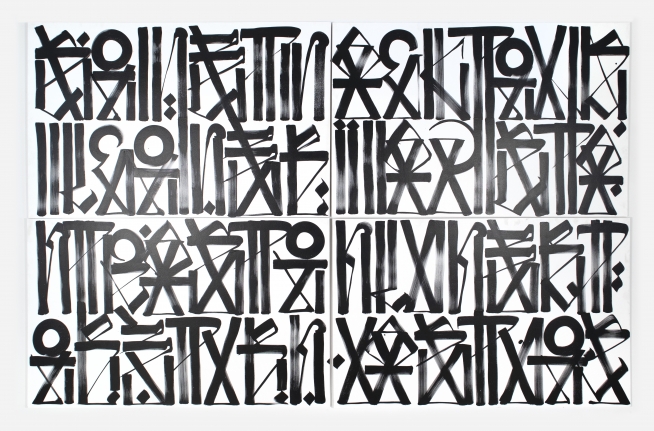 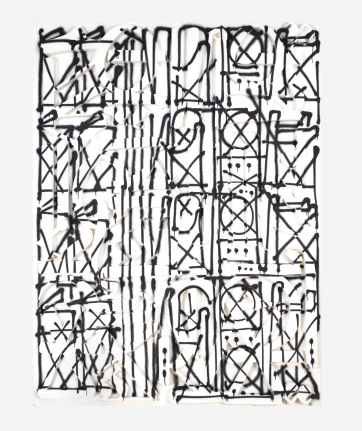 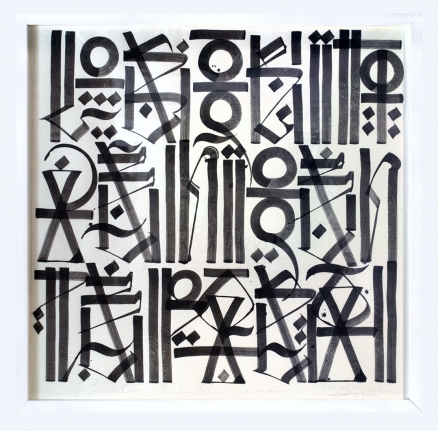 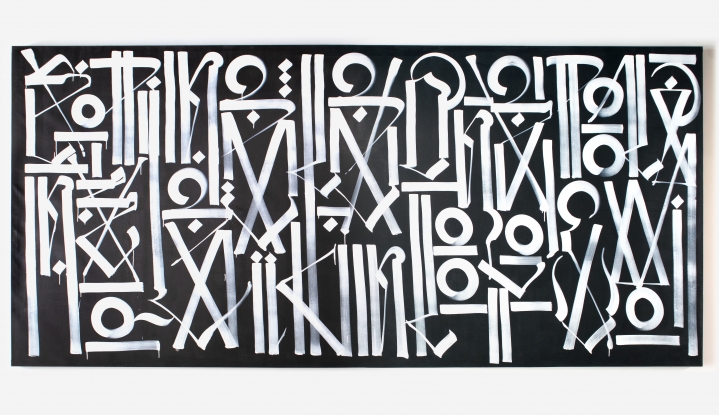 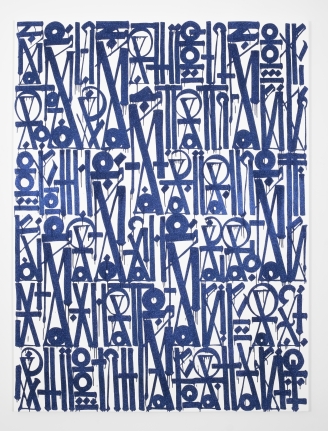 Retna
Sensations of a Distance Mark the Diameter Reached Through the Rotation of Matter of Fact, 2013
Enamel, acrylic and Crystalina on canvas
96 x 72" 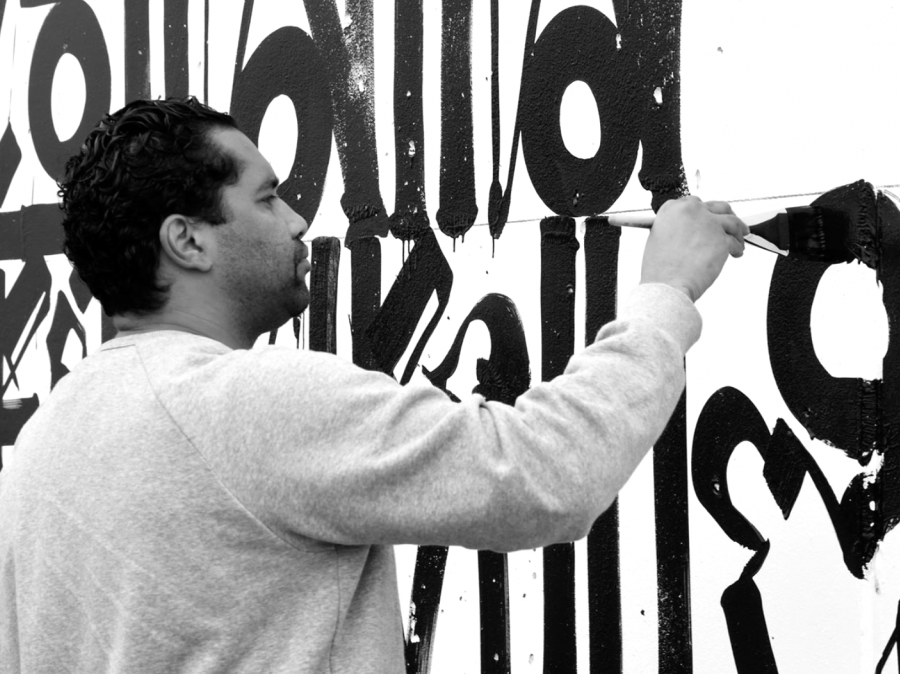